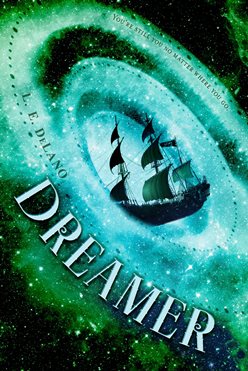 In this scene from DREAMER, Jessa is sorting through her latest reality shift, and juggling the thoughts and memories left by her alternate self.

Ben’s voice startles me and I look away from my reflection in the window of the bus. It’s field trip day for the Spanish Club, and Ben is sitting next to me as we pull out of the school parking lot.

“Who are you? And what have you done with Jessa St. Clair?” he quips. “It’s Twix. Twiiiiiix.” He’s waggling his brows and bug-eyed and it makes me laugh.

“It’s seven o’clock in the morning,” I point out.

“So? Twix is the breakfast of champions. Along with a fresh can of Monster.” He holds the can to his lips, draining it with a loud, gusty sigh of refreshment.

I raise my brows and look at him like the crazy person he is. “You do realize you’re going to be ? With no bathroom?”

“Sitting next to you,” he reminds me, with an overemphasized “Ha!” for punctuation.

Today we’ll be visiting the and tomorrow we visit the Museum of Natural History because they have a special exhibit about indigenous cultures in Mexico and Central America. We’ve been raising money all year, and we’ll even have some time for sightseeing while we’re in the city.

“Whatcha got there?” he asks, nosing his nosy nose over my shoulder as I pull my notebook out of my bag.

I hesitate for a moment but finally relent. Ben knows everything about me—including the fact that I am a Traveler. “One of my other selves left me a poem she’d been working on.”

“I should have known when you whipped out the notebook,” he says. “I haven’t seen you write a thing in weeks.”

“I’ve written two papers for English Lit this month and one for History,” I remind him.

“You know what I mean. Writing writing.”

I do know what he means.  I’ve lost the spark. Finn had been the center of so many of my stories for so long. My dreams—which I now recognized as memories and glimpses of my other selves—fueled so much of what I wrote about. Now, the urge to write just for pleasure is gone. I even changed my schedule for next semester to remove creative writing. I’m taking a photography class instead.

“Let’s see what the damage is,” I say, flipping open my notebook and reading.

The darkness calls me and I am it

They pull us into the light

Not seeing the fist

We keep in the darkness

Clenched in our pocket

I close the notebook with a sound of disgust. “Yeah, I’m a little rebellious over there.”

“Is that why you told Justin Taylor he looked like walking mucus in that green shirt last night at Mugsy’s?”

“Who told you that?”

“He did, when I walked in. I didn’t even think you knew his name, St. Clair.”

I search back in my mind for the memories my other self generated while she was here. “No . . . that was her assignment.”

“To tell Justin he looks bad in green?”

I shrug slightly. “Yeah, believe it or not.”

“How is that reality-altering in any way?”

“Ripples. Every decision has the possibility of making ripples that influence other decisions,” I explain. “He probably obsesses on my remarks and gets distracted and trips into a guy who drops his briefcase on the foot of an elderly woman who curses him out and that will inspire him to invent a whole new line of antibacterial mouthwash that saves the world from a terrible plague.”

Ben lets out an explosive laugh. “That is wacked.”

“Tell me about it. But there’s a reason for every little thing, and it all snowballs to be something really important, somewhere down the line,” I say. “Or so my Dreamer assures me.”

DREAMER is the second (and final) installment of the TRAVELER series. Come join Jessa as she saves the multiverse!

Cover Reveal Tomorrow for my next YA novel, BLUE! You’re going to love this cover as much as I do!
How am I supposed to get a damn thing done when he's this freaking cute?
Four years ago, I took @bella.orsini to London for her 16th birthday. We were on a shoestring budget and spent the majority of our time wandering and eating street food. Our one big splurge was the sunset tour at Stonehenge (SO worth the extra money) preceded by a visit to the historic and perfectly preserved village of Lacock (often used in filming for it's appearance - you'll see it in Pride and Prejudice, Harry Potter, etc.). We were down to almost nothing for money, so we skipped the fancy restaurant meal everyone else had on the tour, and opted for sandwiches in this magical spot along the Avon. Then we wandered cobbled streets, visited centuries-old churches and graveyards , and soaked in a lovely spring day. It's a memory of her, and of England that I will always cherish.
#WednesdayWisdom