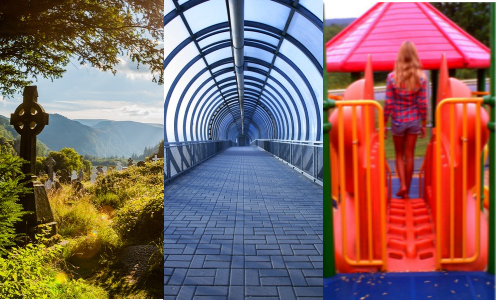 I’m never just writing one book. I’ll be grooving away, pounding out the words and suddenly, a whisp of an idea floats in that has nothing whatsoever to do with what I’m currently writing. Or maybe I’ll be daydreaming on my commute home, or listening to an old, familiar song, and something slides in, swirling around, trying to solidify. Sometimes I’m just watch my own teenage daughter navigate her world, and something she says or tells me about digs in, planting roots, insisting I visit and discuss.

The problem with that is, you end up with what I call “Irons in the Fire Syndrome,” which I had for years. There was a time when I had 6-10 partially finished books laying around at any given time. It wasn’t until I learned to focus and have the discipline to finish that I started making stories into books.

And now that book 2 of the Traveler series is in the editor’s hands, I look to the next thing on the horizon. This particular horizon can be viewed from a port that has three ships anchored in the water, waiting for me to throw the wind into their sails.

Book one is based upon the Tuatha Dé Danann, the supernatural race of beings in ancient Ireland, who dwell in an “otherworld” full of magic and mystery. One girl from our world follows her Irish heritage and makes her way there, determined to restore a kingdom, and runs right into a lad with lethal blue eyes, a killer accent, and a carefully guarded secret that will aide her on her quest. This one will have it all: magic, castles, villains and surprise sovereigns. I’m tentatively titling this one Legacy.

Book two I’ve done a little more work on, even shown you some of the lines in my #1lineWednesday posts. This one is set in the not-too-distant future, on an earth that is recovery from a large pandemic. A girl named Journey is one of the onlies, children left orphaned by the pandemic and raised in special centers. A year before she finishes secondary school, she travels to the closest evaluation center for skills testing and interviews, so that she can hopefully get one of the better work assignments upon leaving school. At the center, she learns the awful truth: As an only, she is expendable. She’ll be given a memory-retrieving serum, and she’ll be allowed to record (with the aid of her interviewer) any ten memories from her life that she would like to have recorded, to be sent to a special archive so that her contribution to society is preserved. At the end of her ten memories, she’ll be humanely terminated. Will the memories be the key to helping her get out of this? And will her interviewer decide he has more of a stake in her survival than just pushing buttons? I’m calling this one Journey’s End.

Book three is a contemporary tale, about a girl named Blue. She’s having a rough time adjusting after a terrible accident takes her brother from her. Just as things begin to smooth out, fate throws her a firm fist to the stomach, forcing her to relive the hell she thought she’d already passed through. She heads to her old neighborhood playground to find her favorite hiding place, wanting to curl up into it and fade away. Instead, she meets Ethan, a new guy in school with zero worries and a personality that simply refuses to have a down day. Can he pull her out from under the dark clouds? Or will the secret he’s not telling her drag her further down? This one’s title is Blue.

So, readers….tell me? What sounds intriguing to you? And why?