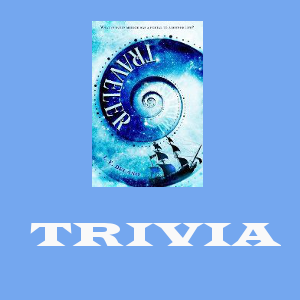 Now that TRAVELER is out and hopefully being read at a steady rate, I thought it might be fun to share some behind-the-scenes trivia. Some of this stuff will be familiar if you were among the early beta readers at SwoonReads.com, but at least one of these tidbits will surprise you:

And now for the final tidbit, one that even the early readers couldn’t know.

5. In my original plan for the full story arc, Dreamers weren’t confined only to the dreamscape. They were more like Travelers who’d gotten a promotion and could access both reality and dreams. In the original plan for the final installment of the series, Mario was going to give Jessa his Dreamer powers so that she could do something very important. It was going to be equally important that she give the powers back to him at the end – but in order to do so, she’d have to find him in the real world.

“How do we know who he is in real life?” she was going to fret to Finn and Ben. “He’s got to be an Einstein or a Stephen Hawking! He’s got to have a mind that doesn’t work like everyone else’s!” And that would be when she realizes the truth: Mario is really her brother, Danny.

Of course, this ending won’t work now so it’s been discarded, and Danny is Danny and Mario is Mario and never the twain shall meet.

Oh, wait. That’s not entirely true. But you’ll have to wait for DREAMER to get the scoop on that scene.

2 thoughts on “Time For A Little TRAVELER Trivia!”