A To Z Blogging Challenge: J Is For Joke 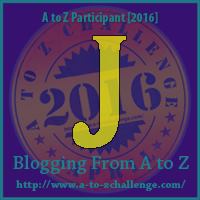 I think every one of us has had that one friend who just gets us.

In my upcoming novel, Traveler, Ben is exactly that kind of friend to Jessa, and his jokes made for some of my favorite moments in the book. Take this scene, for instance…

“You could give me a little help, here.” I point out.

“I’m not going to be seen carrying that thing,” he says. “You could just throw it away, you know. It’s made out of cardboard, paper and string. It’s not like you broke the bank building it.”

“I spent almost three hours on it, getting it right,” I complain.

He rolls his eyes. “Where are you going to use an astrolabe again? You just can’t stand to throw it away. You’re a pack rat.”

“Yes, you are. You can’t even put it in your locker because your last six school projects are in there.”

I don’t answer him because it makes me mad that he’s right. I just hate getting rid of stuff I worked so hard on. It doesn’t seem fair somehow, even though it’s all getting crushed and probably broken in my locker and I’m going to throw out the smashed mess at the end of the year, anyway.

“Give it to me,” Ben says, holding out his hands.

“Come on. We’re fixing to walk right past those big garbage cans outside the cafeteria. I can toss it on the way and you won’t have to carry it around all day long.”

“All. Day. Long.” He raises his brows and stands there waiting. I finally put it in his hands with a disgusted look.

He jogs ahead a few paces, lobs the astrolabe like a basketball and sinks it perfectly on the top of the cafeteria trash, right by the door. Early lunch has already dismissed, so it sits perched on top of the pile, resting against some tater tots. I keep walking, and I can’t help but glance over at it guiltily as I pass.

“There,” he says. “Taken care of. And I’ll be checking the dumpsters after school, so don’t get any ideas about digging it out.”

He reaches out, and holds me gently by the upper arms. “You’ll get through this, Jessa,” he says dramatically. “You’re the strongest person I know.”

“Have you ever taken an astrolabe to the face?”

He chucks me under the chin and trots off toward his class, calling out, “You’re an inspiration!”