Beware Of “Irons In The Fire” Syndrome 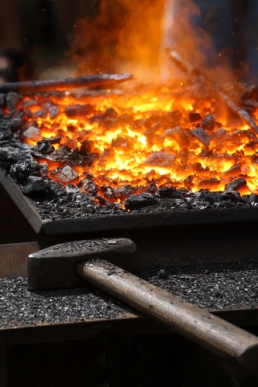 My writerbrain is fully engaged right now as I finish edits on “Traveler,” and in addition to that, I’m blogging on a few different platforms and I have a two other projects going. I’m used to multi-tasking, but things have to stay orderly.

For years, I had what I like to call “Irons in the fire” syndrome, where I had three half-complete potentially really terrific books that I might hypothetically get published in the future, whenever I decided to finish them. Which was pretty much never. Three half-finished novels became six, and seven, and ooooh, boy were they going to be great.

Whenever I finished them, that is.

Then something fun happened – through a quirk of fate, I ended up with a free session with a life coach. We spent the whole day together, and a lot of what she had to say was just plain common sense. Some of it was stuff I knew I wouldn’t do (like going on her personal and expensive yoga retreats), but I did get one takeaway from the session:

She told me that if I wanted to be a writer, I needed to have something to show for it. I’m like a football player who practices all the time and may be one of the best, but I never went out for the team.

Writing “The End” for the first time was such a victory, and it still is, every single time. And it makes you hungry to start anew and get to it again.

Get those irons out of the fire and forge a sword to brandish on a mountaintop, already.