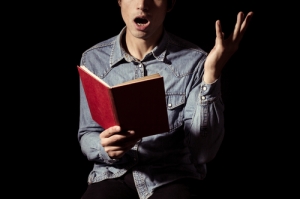 Over the weekend, I read this piece from Lorin Stein of the New York Times regarding the need for literary magazines, and the need for writers to disengage from the media hype and just write in their own solitude.

This article resonated with me on so many levels. Lorin makes an excellent point about the direction of modern writing in this era of Facebook and Twitter and Instagram:

There is a sound I hear in lots of “literary” stories and novels today, not just the ones that come to me on submission, but published work too. It’s the sound of fingers on a keyboard. When I’m supposed to hear the voice of a narrator, or see a family around a dinner table, what I’m actually aware of is the author pushing a product, specifically, the image of the writer at work, doing his or her best to shock and charm.

He goes on to describe a method acting term known as “public solitude” – in actor terms, that means pulling inward, shutting out that audience, concentrating on the stillness or noise within yourself, and then building out to include the other actors in that moment with you. The audience is on the periphery, but you’re not there for them.

That kind of focus brings the best performance and that, my friends, is what your audience is paying for.

When you’re writing,  you need that same sense of public solitude. The audience needs to remain on the periphery  – notice I don’t say “shut the audience out” or “ignore the audience.” You have to know that they’re there.

An actor has to be cognizant of his audience for the way he places his body or uses his voice, to feed off their responses and know how to adjust his timing, and likewise an author has to be aware of his market, of the reviews and comments of his readers, of what his editor and publisher are looking for, but those things cannot come before the story that’s inside him is found and made to flourish in the stillness.

Food for thought in a candlelit room, with the sound of pen scratching on paper.