Welcome To The YA Scavenger Hunt!!

Holy Guacamole, it’s a YA Scavenger Hunt! This bi-annual event was first organized by author Colleen Houck as a way to give readers a chance to gain access to exclusive bonus material from their favorite authors…and a chance to win some awesome prizes! At this hunt, you not only get access to exclusive content from each author, you also get a clue for the hunt. Add up the clues, and you can enter for our prize–one lucky winner will receive one book from each author on the hunt in my team! But play fast: this contest (and all the exclusive bonus material) will only be online for 72 hours!

Go to the YA Scavenger Hunt page to find out all about the hunt. There are SIX contests going on simultaneously, and you can enter one or all! I am a part of the BLUE TEAM–but there is also a red team, a gold team, an orange team, a red team, and an indie team for a chance to win a whole different set of books!

If you’d like to find out more about the hunt, see links to all the authors participating, and see the full list of prizes up for grabs, go to the YA Scavenger Hunt page.

Directions: Below, you’ll notice that I’ve listed my favorite number. Collect the favorite numbers of all the authors on the blue team, and then add them up (don’t worry, you can use a calculator!).

Entry Form: Once you’ve added up all the numbers, make sure you fill out the form here to officially qualify for the grand prize. Only entries that have the correct number will qualify.

Rules: Open internationally, anyone below the age of 18 should have a parent or guardian’s permission to enter. To be eligible for the grand prize, you must submit the completed entry form by Sunday, Oct 7th, at noon Pacific Time. Entries sent without the correct number or without contact information will not be considered. 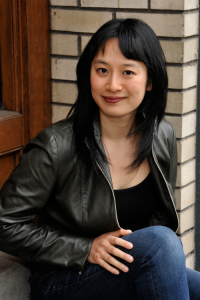 So, basically, she’s an all-around badass. And her books are INCREDIBLE (justifiable capitalization, believe me!)

About CROSS FIRE: In the stunning follow-up to Exo, Earth’s century of peace as a colony of an alien race has been shattered. As the government navigates peace talks with the human terrorist group Sapience, Donovan Reyes tries to put his life back together and return to his duty as a member of the security forces. But a new order comes from the home planet: withdraw. Earth has proven too costly and unstable to maintain as a colony, so the aliens, along with a small selection of humans, begin to make plans to leave. As word of the withdrawal spreads through the galaxy, Earth suddenly becomes vulnerable to a takeover from other alien races. Invaders who do not seek to live in harmony with humans, but to ravage and destroy the planet for its resources.

As a galactic invasion threatens, Donovan realizes that Sapience holds the key that could stop the pending war. Yet in order to save Earth, all species will have to work together, and Donovan might just have to make the ultimate sacrifice to convince them. But can one person save an entire planet from total extinction?

Author’s Note: In Cross Fire, the tensions introduced in Exo come to a head when the alien zhree announce their intentions to withdraw from Earth. In this scene, Donovan encounters his old enemy, Saul, during the peace talks between the government of West America and the rebel group Sapience. It’s a scene that shows how far apart the different human factions are, but it’s also a moment of shared grief between these two very different characters over the death of Donovan’s mother. The scene was eventually cut in favor of having Donovan spend the time during the peace talks with Anya instead, but I’ve always liked the Donovan/Saul interaction.

That evening, Donovan paused and turned around by the door before leaving Saul in his hotel room. The Sapience commander’s large frame filled the armchair where he lay sprawled, a small whiskey bottle from the minibar cupped in his callused right hand. A cigarette dangled from his mouth but remained unlit, as if he didn’t even have the energy to find his lighter.

“What exactly are you trying to accomplish?” Donovan demanded.

“I thought you were here to negotiate on behalf of the Human Action Party,” Donovan said. “That’s why the True Sapience people are angry at you, isn’t it? For being willing to compromise? I haven’t heard you compromising at all. Nothing’s changed.”

Saul took the cigarette from his mouth so he could drink from the bottle. “That’s because you haven’t been listening closely, stripe.” He sank deeper into the chair. “I’m not going to roll over to those politicians. They’ve got to know where we’re coming from, that we won’t settle for small changes.

“What changes are you going for?”

“Earth declared independent of the Commonwealth. An elected human government that doesn’t answer to the Round. Free human cities. A national militia of unmarked servicemen and women, separate from SecPac. Sapience delisted as an illegal organization and political prisoners released.” Saul paused. “That would be a good start.”

“Dreaming is what we rebels do, zebrahands.” Saul cocked his head and abruptly raised one blunt-nailed finger. “You hear that?”

“That is the sound of something missing. It’s what I haven’t said: All shrooms off of Earth for good. The disbanding of SecPac. An end to all Hardenings, now and in the future.” One side of Saul’s mouth lifted humorlessly at Donovan’s derisive expression. “What I haven’t said has made a lot of old friends angry and might just get me killed.” He leaned his head back against the chair, closing his eyes. “You can’t say I haven’t compromised.”

Donovan’s lip curled. As he turned and put his hand on the door to leave, Saul said, “Wait.” Then in far different voice, he asked, almost in a whisper, “Is it true what they say, that people don’t feel any pain in the atomizer?”

Slowly, Donovan turned around. “It happens faster than you can blink.”

Saul opened his eyes and looked at Donovan with a dull but strangely pleading expression. “What was she like? Before it happened.”

Donovan’s chest was tight; he found it hard to answer. “She was smiling.”

Slowly, Saul nodded. “I still miss her,” he said hoarsely, not looking away. “Your mother. There are days when the only reason I keep going is because I can’t let her sacrifice be a waste.” Saul sighed so deeply that his breath rattled at the end. “Fighting for the cause is a young man’s game; it sucks you dry and spits you out. I’m dead tired, zebrahands. And I miss her. Every goddamn day.”

Wordlessly, Donovan let himself out of the room, then leaned his back against the closed door and squeezed his eyes shut. “Me too,” he whispered.

Find out more about CROSS FIRE (and buy your copy) here!

And don’t forget to enter the contest for a chance to win a ton of books by me, Fonda, and more! To enter, you need to know my favorite number (blatant hint: it’s 3). Add up all the favorite numbers of the authors on the blue team and you’ll have all the secret code to enter for the grand prize!

You’ve read this far? GREAT! I’ll make it worth your while! How about a bonus chance to win signed copies of TRAVELER & DREAMER,  plus a swag pack that’ll see you into NanoWroMo next month?

You can enter that drawing here and it’s open until 12:00 am  Eastern Daylight time on Sunday, October 7th.

To keep going on your quest for the hunt, you need to check out the next author, the indomitable  J. Keller Ford!