Happy ‘Talk Like A Pirate Day’! I Love Me Some Pirate Finn! 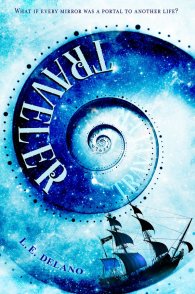 He was born with the sea in his veins and the smell of salt in his hair. . .

That’s a line from my YA fantasy novel, TRAVELER, and yes indeedy….it’s got a pirate! Despite their often smelly and bloodthirsty reputations, movies and books seem to be chock full of handsome pirates, quick with a witty retort or a clever bit of swordplay. And why not?

The call of the sea, the break of the waves, the clean, fresh air and the moonlight on the water….

It’s just made for romance. So when my protagonist, Jessa, started stepping through mirrors into fascinating new worlds and meeting all sorts of versions of the people she knows and loves, I knew one of those adventures was going to have to take her into the arms of Pirate Finn, the alter-ego of the rather stoic but sensitive Finn she’s come to know in her own world. And ohhhhhh, is that a great first meeting…

Come on, who doesn’t love a handsome pirate with a devastating amount of charm and a devilish sense of humor?

TRAVELER is available in bookstores or through Amazon.com! And mark your calendars, because it’s sequel, DREAMER hits the shelves April 12th!